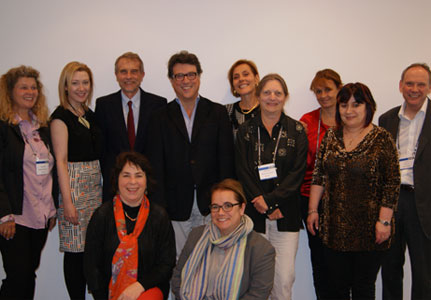 The General Assembly, which offers an opportunity for full members to have their say in the governance of EURORDIS and to weigh in on important topics, put the spotlight on the different EURORDIS Volunteers who play an active and vital role in the success of EURORDIS. To properly recognise the important contribution of Volunteers, a new EURORDIS website section has been created. The Charter of the EURORDIS Volunteers, emphasising the core values of EURORDIS, was presented and adopted during the General Assembly.

The EURORDIS Activity Report 2013 presents gamut of activities in which EURORDIS was engaged throughout 2013, outlining the numerous initiatives, goals and accomplishments achieved in the areas of Advocacy, Information & Networking, Health Policy & Health Services, and Research, Drugs & Therapies. The Activity Report also summarises EURORDIS’ strategic approach (2010-2015) and lists the organisation’s revenues and expenses, governance structure, staff appointments, members and supporters. It also contains the Workplan for 2014, including the Action Plan and Budget.

After the EURORDIS General Assembly, the EMM continued with the popular Learning from Each Other sessions designed to offer patient advocates the opportunity to discuss and exchange best practices. This year Crowdfunding, Education & Employment Initiatives, Surveys as Advocacy Tools, and Online patient forum RareConnect were featured. The day continued with four parallel Patient Advocate Capacity Building Workshops held in the afternoon on the topics of Best practice guidelines; Views on ethical, legal and social issues in research; Patient advocacy to improve access to Orphan Medicinal Products; and the Integration of Rare Diseases into social policies. In the evening, a social networking event allowed participants to continue exchanging ideas, practices and experiences. As the EURORDIS Membership Meeting took place this year in conjunction with the European Conference on Rare Diseases & Orphan Products (ECRD 2014 Berlin), most members stayed on for the ECRD, featuring two more full days of learning, exchanging, and moving forward solutions for people with rare diseases.