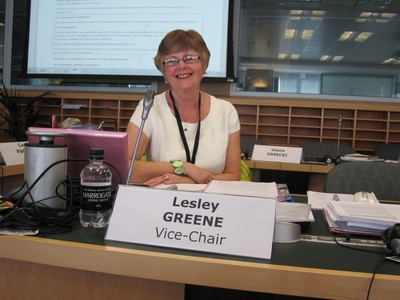 Professor Sepodes succeeds Professor Kerstin Westermark, who completed the maximum of 2 mandates (6 years) as Chair of the COMP.  Prof Westermark, an enthusiastic supporter of patient participation, will continue on the Committee as the Swedish representative. Prof Sepodes is at the University of Lisbon and brings his experience as member of the Evaluation Board of Medicines of the Portuguese National Authority of Medicines and Health Products. Since 2008, he has been a COMP representative of the Commission on the EMA’s recommendation.

Lesley has been a member of the Committee since 2009. She contributes her personal experience as the mother of a patient with a rare metabolic disease, clinical trials and a solid knowledge of the drug development process. As a long-standing and active member of the rare disease community, she brings over 20-years’ experience as a patient advocate.

The COMP has the distinction of being the first of the European Medicines Agency’s scientific committees to include patients’ representatives as full members. This has since been followed by the Paediatric Committee, the Committee for Advanced Therapies and the Pharmacovigilance and Risk Assessment Committee. COMP Patients’ representatives, since its creation in 2000 as a result of the Orphan Drug Regulation EC 141/2000, include Yann Le Cam (vice-chair 2000-2006), Alastair Kent, Birthe Byskov Holm, Pauline Evers and Lesley Greene all of whom have contributed to this success.

Learn more about the EURORDIS work at the EMA

Read more about Orphan Drugs and the drug development process