Every year EURORDIS organises its Membership Meeting in a different European city. This is an occasion for patient representatives to gather and learn from each other. 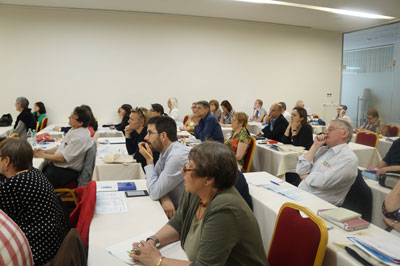 The EURORDIS Membership Meeting 2013 took place in beautiful Dubrovnik, Croatia from 30 May – 1 June, and participants were cordially invited to put on their thinking caps!

Over 200 participants from over 30 countries were in attendance to discuss issues ranging from funding for National Plans for Rare Diseases, off-label use of medicines, newborn screening and genetic testing, strategies and tools for improving patients’ access to orphan medicinal products, registries, European reference networks, centres of expertise, and specialised social services. The ambitious agenda demonstrates the complexity of issues facing the rare disease community. The presentations exposed each topic in detail and evoked a rich exchange between participants, who were able to share ideas on various issues, such as capacity building to meet the challenge of moving forward national rare disease strategies. Satellite meetings included a Learning from Each Other workshop on social media best practices and patients’ social forum RareConnect that was particularly appreciated. The EURORDIS General Assembly also was held during the Membership Meeting.

EURORDIS was able to offer 42 fellowships for this year’s Membership Meeting, including 30 for patient organisation representatives from Croatia and surrounding countries. The meeting had representatives for the first time from Lebanon. It was wonderful to get to know some new friends and catch up with some old ones!