Racing against time: Seeking the cure for a deadly disease

Home » Racing against time: Seeking the cure for a deadly disease

“Still, today, I believe that the period of 50/50 limbo while we were waiting for the test was the hardest time.”

Ten years ago, Harvard Law School student Sonia Vallabh’s world was turned upside down when her mother’s health rapidly deteriorated after initial complaints of trouble with her vision. Descending quickly into dementia, pneumonia, and disability, it was not until after the death of Sonia’s mother that a diagnosis for prion disease was confirmed. But the nightmare did not stop there — Sonia soon found out that she, too, had inherited the deadly disease. 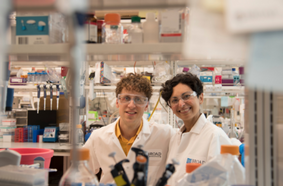 tests for most rare diseases by 2020 — we have invited Sonia who is a Keynote speaker for the Solve-RD annual meeting, to share her thoughts on the future of rare disease research, as well as her own race against time to come up with a life-saving treatment.

You have chosen an unusual path as a person with a rare disease, to do hands-on research. Which other ways do you think patients can add value to research? Have you reached out to patient organizations?

There are so many different ways that patients and at-risk individuals can enrich and expedite research, and no one path is right for everyone. We’ve made the extreme choice to devote our lives to research, but in the process I hope we’ve helped to create and highlight different kinds of opportunities for others in our community to contribute to progress against this disease.

Some at-risk individuals in our community participate in our natural history study, donating their blood and spinal fluid and time and energy to our biomarker studies. The data from these studies have been discussed directly with FDA – they are pivotal to designing the right clinical trials. So this is a huge contribution!

We also helped to launch a prion disease registry at PrionRegistry.org. This is a tool to help recruit for clinical research and also someday, clinical trials. In the meantime, numbers from the registry help to convince partners across sectors that even though this is a rare disease, we are well organised and capable of running rigorous clinical trials. So by signing up, patients and families help to convince the world that our disease is worth working on!

We do work closely with prion disease patient organizations, including the CJD Foundation and the CJD International Support Alliance, both of whom were our partners in launching the registry, and we also run our own non-profit, Prion Alliance. We’ve had a number of affected individuals and families run fundraisers for Prion Alliance in order to raise both awareness and research funds. This is another really meaningful way to get involved.

What was the importance of having a diagnosis for you?

Because I learned from my mom’s autopsy that she had died of genetic prion disease, for me the choice was either to live in 50/50 limbo, uncertain of whether I had inherited her disease-causing mutation, or get predictive genetic testing in order to know the answer. It’s not a position that anyone wants to be in, but for me getting the predictive genetic testing was the lesser of two evils.

Still, today, I believe that the period of 50/50 limbo while we were waiting for the test was the hardest time, because our minds couldn’t rest or adapt – we were constantly wondering. Once we had the result, even though it wasn’t the result we’d hoped for, we could at least start to move forward with our lives.

I think we’re living in an amazing moment in which genetically targeted therapeutics are really hitting their stride, and this is creating some unprecedented opportunities for rare diseases.

If our quest had begun ten years earlier we would not have had the same tools or the same prospects to really advance a therapeutic. But rare diseases sometimes have the one key advantage of being genetically well defined, and for this new crop of therapeutic technologies that can be the single most important determinant of success. So suddenly these diseases are of interest to a range of partners despite the low numbers of patients.

Now, I do think we’ve had to do a lot in our own hands that for a more common disease, a company would likely choose to do themselves. We’ve had to develop a lot of tools, and a lot of proof of concept to make ourselves attractive partners. Nevertheless, I think it’s remarkable that this can be done for our rare disease and we see examples of many others.
Big scientific challenges remain but I think it’s certainly the most exciting time in history to be working on a rare disease and hoping to make a difference in your lifetime.

Do you think there might be a point in time where you will have had enough of research and want to live your life differently?

Early in our research career, an advisor asked us, “What will you do after you’ve cured prion disease?” This was before we had much to show for ourselves, so I still marvel at their optimism and faith in us! But I’ve also come to appreciate that in a quest like ours, even if you do develop an effective drug, there is no “after.” The work goes on and on.

There will always be improvements to make: to dosing regimen, side effects, potency, delivery, diagnosis, how many patients we are able to reach, how many at-risk people we are able to reach before they become patients. We’ve built a platform to stand on in order to tackle these issues, not just once, but iteratively.

And we’ve made a commitment to our community – they are counting on us. So, I don’t think that even significant advances could tempt us to call it a day and walk away from this line of work. With that said though, I am often exhausted and fantasize that maybe someday we’ll take a vacation. That would be – wonderful.

Has the decision to dedicate your life and work to researching your condition been influenced by the nature of this rare disease?

Yes. When we got my diagnosis we jumped into science in order to learn some of the basic tools, and our first day jobs in science weren’t focused on prion disease. After about two years felt we had learned enough to have a reckoning about what should come next. We wanted to pivot to making a difference for our disease in particular, but what was the best way to do that?

Here, I think the details of our exact disease mattered, and the answer could be very different for other diseases. It so happened that prion disease was already well understood genetically and mechanistically – two Nobel Prizes had been awarded in our small field. Prion disease also has certain unique resources such as centralized diagnosis and biobanking in many countries. There were already active patient support groups.

To us, the time seemed right to take advantage of all of the building blocks put in place by others, and leverage existing knowledge and resources in order to strategically develop therapeutics. But when we talk to others who have received a rare disease diagnosis, either personally or in their family, and are motivated to contribute, they are looking at a different disease landscape and therefore can reach very different conclusions about how to have the greatest impact.

Two people who I find inspiring are Josh Sommers of the Chordoma Foundation and Corrie Painter of the Count Me In Initiative – both decided they could have a greater impact empowering their rare disease field with the right resources, rather than doing benchwork themselves, and both have been transformative.

If other people with the same diagnosis want to have a child, what support and advice would you offer them?

We decided to start our family using IVF-PGD (in vitro fertilisation with pre-implantation diagnosis) in order to minimize the odds of our children inheriting my disease-causing mutation. We were so fortunate to have this option, and so fortunate that it worked out for us – we now have two healthy kids, ages 2 and 4.5. But honestly it was a very long and very difficult road for us, as it is for many people.

My advice would be that if you know you are at risk for a life-threatening single-gene disorder and are interested in options like IVF-PGD, start the learning process early. Educate yourself on what is available where you live. Plan ahead even if you think you’re not ready to have kids yet. This can be a many-years-long process. And reach out for help – don’t be shy. Find people who can support you emotionally, who have been through fertility treatment before, even if not for the same reasons. The demands on your time and energy are enormous. Just having such close, chronic contact with the medical system is itself a nightmare. But the rewards can also be enormous, as we are lucky to have learned.

Are there any additional messages of support and advice you would like to share with others with the same diagnosis as well as researchers?

I sometimes hear people say, “Research is for the next generation.” I understand not wanting to over-promise – conveying just the right amount of optimism is a delicate balancing act. But, I have to say that in this day and age, I don’t agree.

Translational research being done today absolutely has the potential to impact the lives of people living at risk today. And this is exactly what imbues our work with such a sense of urgency and jeopardy – the fact that meaningful progress is possible within our lifetimes, but not guaranteed.

It was the way to get the job done. For us, and for everyone else who we hope to help.