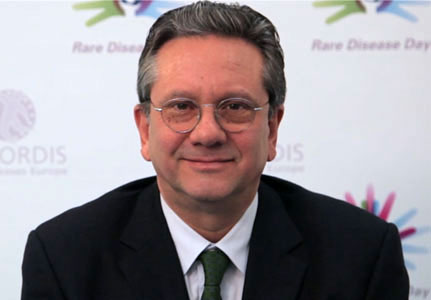 Born in Lucerne, Switzerland, Sean Hepburn Ferrer is the eldest son of the beloved late actress and philanthropist Audrey Hepburn. He grew up in Europe and speaks English, French, Italian, Spanish and Portuguese. His father, Mel Ferrer, was an actor, film director and producer.

Sean Hepburn Ferrer knows about the struggle rare disease patients and families encounter in their quest to find care. His mother, the late Audrey Hepburn, passed away from rare cancer pseudomyxoma adenocarcinoma. In an eloquent video that is freely available on the official Rare Disease Day 2014 website, Sean Hepburn Ferrer describes this experience and how it and other factors shaped his decision to generously and spontaneously accept to be the Rare Disease Day 2014 Ambassador.

Sean Hepburn Ferrer explains: “When my mother visited Africa for UNICEF she would often say ‘We cannot save everyone… but the knowledge that someone is coming to their rescue… that we care as a society is ultimately as important…’. It is in this spirit that I accepted this invitation”.

Rare Disease Day 2014 puts the focus on the many different kinds of Care people with rare diseases need and deserve. The participation of Sean Hepburn Ferrer as Rare Disease Day 2014 Ambassador is already generating increased awareness for rare diseases and the challenges facing patients and their families – as well as policy makers, health professionals, researchers and treatment developers.