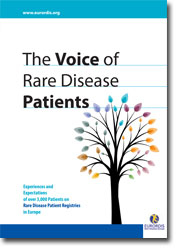 A new EURORDIS book, The Voice of Rare Disease Patients: Experiences and Expectations of over 3,000 Patients on Rare Disease Patient Registries in Europe presents the results of an extensive consultation process including a survey of over 3,000 European patients conducted by EURORDIS as part of the EU-funded EPIRARE project to build consensus and synergies for the EU registration of rare disease patients.

The survey results show that patients understand and value a comprehensive European approach to rare disease registries, strongly favouring EU-level regulation for registries. A European registry platform should be publically funded and patients should be involved in all aspects of governance. Capacity-building is needed to ensure this patient involvement.

Publication of the new EURORDIS book comes at a key moment as stakeholders seek ways to harmonise and coordinate European and international rare disease patient registration via gobally accepted standards and congruent policies that foster effective collection and sharing of rare disease data. EURORDIS actively seeks to ensure that the unified voice of European rare disease patients is represented and that ongoing efforts remain patient-centric. 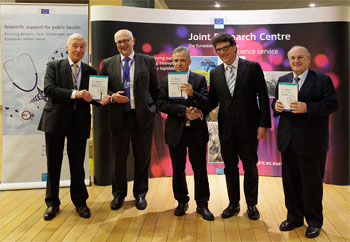 The European Platform for Rare Disease Registries is to be housed in the Institute for Health and Consumer Protection of the Joint Research Centre (JRC) – the European Commission’s in-house science service. The first copies of The Voice of Rare Disease Patients were presented at a recent JRC event in Brussels on 14-15 November: a round table meeting on “Scientific support for public health: existing actions, new challenges and European added value” which gathered a wide range of participants, including policy-makers, scientists, industry representatives and patient organisations. The European added-value of cooperation and harmonisation in the registration of rare disease patients was amongst the topics discussed.

As growing numbers of patients and patient organisations generate data on their own health and take an active role initiating, designing and funding patient registries, EURORDIS is helping to ensure the generation of patient-driven evidence-based advocacy positions and policy proposals that support the strategic objectives of the European Commission in the creation of a European Platform for Rare Diseases Registration. The results presented in The Voice of Rare Disease Patients serve as tools for all rare disease stakeholders establishing or adapting registries.