Living up to your dreams 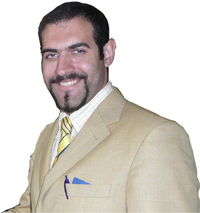 Daniel Sanchez de Vega was diagnosed with Aniridia when he was one week old. His mother Rosa being affected too, the diagnosis was reached early. Aniridia, meaning “without iris”, is a rare genetic disorder characterised by the incomplete formation of the eye’s iris. Aniridia is a degenerative disease and causes, eventually, loss of vision in both eyes. Daniel remembers visiting the eye doctor very often and being very sensitive to light, but it was in school that his condition singled him out. “I had to sit in the front row and sometimes even had to stand to be able to read the blackboard. While playing with the other kids, I was always disadvantaged because of my bad sight,” recalls Daniel.

With its stock of health problems, rare diseases also bring isolation, frustration and sadness. The 23 year old university student sadly remembers his school years. “I went to regular school and at first, I was very lonely. I had to deal with all kinds of mockery, jokes and deception from my classmates. From this point of view, my childhood was hard.” But Daniel got the better of these difficult years. “I got used to this loneliness and developed alternative skills, a great creativity and an inquiring mind. I made the most of my disadvantage by becoming analytical and methodical,” continues Daniel.

Daniel is an Industrial Engineering student in Madrid (his major is Electronics) and what is basic routine for most of us becomes a challenge for rare disease patients. Daniel is in his fifth year and he can’t study without his numerous low vision aids: magnifying glasses, monocles, small telescopes, glasses embedded with small telescopes, portable magnifying monitor, portable lantern, therapeutic contact lenses… The university provides him with magnified notes and allows him extra time in exams but Daniel doesn’t take anything for granted. “I have to continuously remind my teachers of my needs and fight for them. Basically, I have to be willing to invest more time and effort than any other student to succeed. I feel that rare disease patients have to develop a stronger will than others, be very confident of their capacities and never give up!” declares Daniel.

The inspiring determination of Daniel finds its root in the work of Rosa Sanchez de Vega, Daniel’s mum. President of FEDER (Spanish rare diseases alliance), Vice-President of EURORDIS, she has been a rare disease militant for years and herself suffers from Aniridia. Daniel says: “I watched as my mother fought with all kinds of problems. The results have sometimes exceeded expectations and I will follow the same path.” He is a member of and spokesman for the Spanish Aniridia Youth group and wishes to create a network of European Aniridia Young Members.

But for now, Daniel’s focus is on his studies. “Robotics is my ultimate passion. I would like to do research in the future and build an international career if possible.” Next year, Daniel is heading for Korea for another year of university. The 23 year old young man wishes some day to participate in the Paralympics. “I am a tenacious athlete but I guess I’ll have to sacrifice this dream to my first one which is doing research.” Daniel may be ambitious and hard-working but this young man keeps his cool!

This article was previously published in the November 2008 issue of our newsletter.