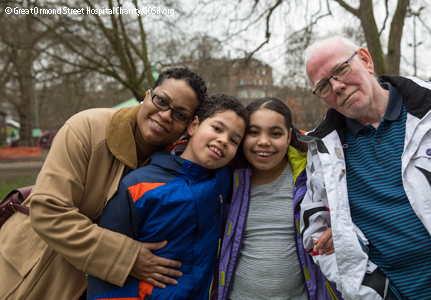 Familial cold autoinflammatory syndrome type 2 (FCAS2) is a rare inflammatory disease characterised by recurrent episodes of rash, joint and muscle pain, fever and chills, swelling of the extremities and conjunctivitis, all as a result of exposure to cold. This could be something as simple as walking down a supermarket aisle that has refrigerators.

Here John tells his family’s story of living with FCAS type 2. Both his wife Laurie and son Keir have the disease.

To me, rare disease means a mutation called R1016X in a gene called NLRP12 on my son’s and wife’s 19th chromosome at position 13. It’s a gene that we all have, but in their case it doesn’t work.

It means numerous wrong diagnoses. At 6 years old, Keir was referred to Great Ormond Street Hospital to see Professor Paul Brogan, where he was finally diagnosed with FCAS, confirming also a diagnosis for my wife after 36 years of living with an undiagnosed disease.

It means they are special – not only because I love them but because globally there are only 26 diagnosed cases and they are the only two in our country.

It means chronic pain and much less peer interaction. It’s fighting through life for things they need and the things that make them more comfortable.

Rare means spending a lot more money on medical expenses than the average person. Speaking to every doctor, nurse and health professional who treat my family knowing that you know more about the disease than they do.

Rare means accepting spending a lot of time on trains and in taxis because not every city has a doctor that understands rare.

Rare means we must travel to another country to see their specialists at different hospitals in the same city.

Rare is a long list of symptoms that, as a parent, you wish you could in some way just sum up instead of having to describe a mutation nobody has heard of, in a gene no one knows.

Rare means getting parking tickets because your loved one has had a flare up in the shop and you have to get the car and wheelchair immediately and park it outside.

Rare is scary and it’s isolating. It’s getting up every day and wondering just how much pain my child or my wife will have and then making plans for the day.

With every breath I take I inhale and exhale their rare condition.

Rare means we cannot plan or really have holidays or weekends away because there could be a flare.

Studying rare has informed me that our disease was only discovered in 2009 even though my wife had been suffering from it since 1977 and my son since 2007.

Rare means taking expensive drugs that are for other diseases because their debilitating and dangerous side effects help relieve some of the pain when it is at its worst.

Rare will keep your eyes posted to every genetic study being done in the hope that maybe, just maybe, today might be the day that someone can help either take away or reduce their pain.

Rare is hope, it’s humbling, it will slow you in your tracks. It will change the way you look at the world and science, you realise just how amazing it all is, but how far we still need to go.

To me, rare is my beautiful wife and fun-loving son. It’s their determination to succeed. It’s their bravery, their generous personalities. It’s their curiosity, it’s the fight in them, their ability to put up with whatever the medical and political world put them through and come out the other end stronger.

Understanding my wife and my son’s rare condition is the hardest but the best thing I’ve ever done.

Keir’s sister Rowan has also written about what it means to be the sister and daughter of a brother and mother living with a rare disease.

Since the diagnosis, my wife and son take an immune-suppressing drug. So far, it’s been a life-changer. It can be risky because Keir is so prone to infections that can quickly develop into something worse.

But in terms of pain management, it’s working well. Keir’s school attendance has gone up from 40 per cent to 80 per cent and he can finally go to parties with his friends.

Keir likes the idea that he’s the only child in the UK with this condition because he thinks it makes him famous. There are times when he’s in pain and he gets upset, but he just gets on with it. He’s a typical rough-and-tumble child and this new drug means he can be one of the boys again.

We don’t know what’s going to happen in the future because there isn’t a large enough pool of people with the condition to do a study or have a clinical trial.

Since our diagnosis, we’ve come to know 12 other patients from across the globe who have this same condition. We have a private Facebook group where we talk about symptoms and give each other support. Because the condition is so rare, we know more about it than the doctors and scientists. We help inform their research by sharing any new symptoms that occur and updating them on how different treatment options are working.

John has recently set up a website on FCAS type 2 at www.nlrp12.com.