‘When I was pregnant

with Victoria, I was quite confident that things would go as smoothly as for my first child. There were no specific signs that she would have a very rare disease,’ recalls Kathy Beuzard-Edwards. Victoria was born prematurely in August 1999. She was incubated the moment she was born, and later whisked to Necker Children’s Hospital in Paris and put into intensive care. ‘We didn’t know what was happening and we were waiting to bring her home with us,’ says Kathy. Victoria stayed at Necker for six months… ‘Before her discharge, the doctors presented us with a very bleak scenario full of unknowns: would Victoria be able to walk or talk? The staff recommended a specialist centre because Victoria needed constant medical care including gavage feeds and growth hormone treatment,’ says Kathy. It was not until Victoria was nearly four, in 2003, that she was finally diagnosed with Kabuki syndrome.

Kabuki syndrome is a genetic disorder typically characterised by unusual facial features, skeletal abnormalities, and light to moderate intellectual impairment. The syndrome was originally known as Kabuki Make-up syndrome due to the resemblance of Kabuki syndrome’s facial features to the make-up used in traditional Japanese theatre. The difficulty of the diagnosis lies in the fact that there are as yet no definitive tests to identify this very rare disease, and public awareness about Kabuki is still in its early stages. Dr David Geneviève from Necker hospital, a prominent expert on Kabuki syndrome in Europe, estimates that there are approximately 15,000 Kabuki patients in Europe. ‘It was a huge relief when Victoria was diagnosed, and I immediately got onto the Internet to do searches on patient groups and families,’ says Kathy. At that time, Kathy discovered the newly created French association, Association syndrome de Kabuki, ASK, of which she is now an active member. There are currently 70 members in the French ASK association, including 38 families affected directly by Kabuki syndrome. For parents and families living with such a rare disease, practically everything needs to be done.

‘I had to search non-stop for two years before finally tracking down the specialised centre where Victoria is now, sending letters to decision-makers, even to the French President! I have become a militant mother,’ says Kathy. ‘One of ASK’s main targets is research on the syndrome at national and European levels,’ claims Kathy. ‘Doctors from Necker Hospital have applied for a project funding with l’Agence Nationale de la Recherche (ANR) for specific research into Kabuki syndrome. A project like that would help us work towards early diagnosis. It’s the second application, and we hope it works this time!’ She and other parents have also talked about Kabuki syndrome at meetings with geneticists, the general public, and through TV and press reports. ‘Our aim is to get the word around,’ says Kathy.

Most children with this very rare disease can walk and talk, but unfortunately, Victoria has a very severe form of the syndrome. She lives part-time with her mother and in a specialist centre the rest of the time. ‘Thanks to an intensive physio and speech-therapy programme, she has learned to get around in her wheelchair and uses pictograms and photos to communicate’. Kathy believes the hardest thing for a working mother in this situation is trying to reconcile all the family’s own “special” needs resulting from Victoria’s rare disease including an older daughter. Kathy now works in the rare disease field, to which she feels a strong personal commitment. 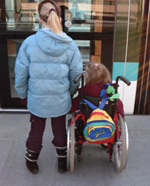 As for the future, Victoria’s mother is cautious. ‘It is so hard to imagine what lies ahead of us. But one thing’s for sure: Victoria is very slowly gaining a form of human independence, as well as a real quality of life. Accelerating social and medical advances, including the long-awaited 2005 Disability Act in France, all contribute towards increased opportunities for children such as Victoria.’

This article was previously published in the April 2007 issue of our newsletter.