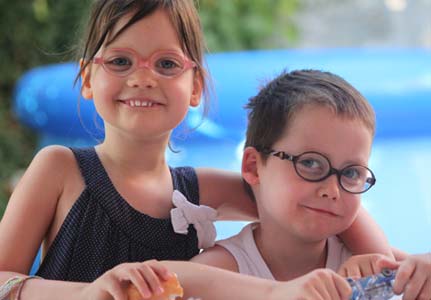 In 1996 we gave birth to Marie, picturing life as a normal family, filled with happiness. Unfortunately, Marie began to present disturbing signs of health from the age of 6 months; big problems with food in particular. Our paediatrician directed us to the Necker children’s hospital in Paris and our fears began.

After numerous examinations, the verdict fell: Marie was affected by an extremely rare condition affecting the respiratory chain cells. The gene responsible for this disease was unknown and the chance of finding a remedy very low.

In spite of this bad news, we were filled with hope and could not imagine the worst for Marie. We loved her with all our might, hiding our growing anxiety over the course of months of hospitalisations and more and more home care. Unfortunately, in spite of Marie’s enormous courage and desire to live, she died of cardiac arrest in the arms of her father in January 1998 at the age of 17 months.

This event was very hard for us to surmount, but we could not imagine remaining childless. After several months, we tempted fate, and again made contact with Necker hospital to learn about the possibilities of having another child.

After several appointments, we got approval to try a new pregnancy, believing that the disease would be detectable during prenatal examinations. We thus took the chance and a new pregnancy began in July, 1998. After a biopsy and three amniocenteses the hospital informed us that we could keep our baby, who, according to all the results, was not affected by the disease.

In March 1999, Noemie was born, filling us with joy. On no account did Noemie replace her sister Marie, who held a very special place in our heart. It was the beginning of a new life. Everything went along without incident until the day when we went to the hospital to present Noemie, who was already 10 months old, to the professor and staff who had followed us throughout our journey.

On this day, unfortunately, nothing went according to plan. We were happy when the office door of the professor opened, because we wanted to thank him and were proud to present our little girl Noemie. We sat in his office and began to discuss Noemie, her development, eating habits, etc., when the professor uttered the following sentence: “What I see concerns me. Would you agree to perform a cardiac echography on Noemie?” We naturally gave our agreement. One hour later the verdict again fell: Noemie was affected with the same disease as Marie.

Everything collapsed around us, and we had only a single question which returned ceaselessly: Why?

In spite of all the examinations during the pregnancy, the disease was not detected. The gene responsible tricked us all – including some of the biggest genetics researchers in France. This new blow was rough, and we hung on the best we could by trying to keep hope. In June 2000, we were at Necker hospital for a heart transplant to try and save Noemie but during pre-implantation examinations, the heart of our little girl stopped beating, to our greatest despair.

We decided this day that we would never have more children, but we didn’t take into account the infamous “fate”.

In June 2007, Séverine accidentally got pregnant again, despite contraception. We wondered what to do. During the first echography we discovered Séverine was pregnant with twins! Twins? Why us? Was it a vindication on the life of our departed children?

We found ourselves again at Necker hospital, discussing the advances in genetic research on this disease. The professor informed us that he had not yet discovered the gene responsible for the death of Marie and Noemie, but thought, as we did, that it would be a sweet revenge on life itself to pursue this pregnancy, knowing that the statistics were this time in our favour. Having twins, there was only one possibility in sixteen that our two children would have the disease – that is almost a 94 % chance that everything would go well.

Thus, we did not terminate the pregnancy and crossed our fingers that fate would not again strike our family. On 29 January 2008, Tristan and Lily were born.

What happened next … you may have already guessed by now. But contrary to all expectations, and to our greatest joy, Lily and Tristan have incredible strength and the will to live and fight their illness.

Although the MRPL3 gene was discovered at the end of 2011 by the Necker research team and INSERM, the French national medical research institute, the disease remains elusive. The discovery of a MRPL3 gene mutation changes nothing for us for the moment, unless we wish to have another child, when it will be possible to detect the disease during pregnancy. Everything else on the functioning of this gene still needs to be understood.

There are only four known cases in the world of the MRPL3 gene mutation and disease in 2014. This seems to us totally unreal, but it is a fact.