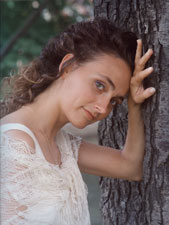 Speaking with the eyes,

Luigi Ferraro, was the happiest man in the world: his wife Daniela was about to give birth to their second child. Then, without warning, their whole world fell apart. Only five hours after Daniela gave birth, she started having headaches and went into a coma.

‘I immediately panicked,’ remembers Luigi, ‘because I had no idea what was happening and the doctors didn’t either. They found she had hemorrhagia in her brain stem and they moved her to another hospital, where she was operated on to clean the damage done by the hemorrhagia. “She has no chance of surviving,” the doctors told me after the surgery. But she did, even if she was still in what was believed to be a deep coma. Eventually the doctors said my wife had to leave the intensive care unit, and Daniela was moved to another care structure. The medical personnel in this structure were very unprofessional, so I decided to have Daniela moved to a better one. It is then that I noticed intuitively that Daniela was awake and fully conscious.’ “You are being too emotional; you are refusing to accept reality, your wife is in a coma,” was the doctors’ response. But Luigi didn’t give up, and the medical staff soon realised that Luigi was right. Daniela was conscious, even if she could not move any part of her body! Unfortunately it had been five months since Daniela gave birth, and much precious time had been wasted. At long last the doctors diagnosed Daniela with Locked-in syndrome.

Locked-in syndrome (LIS) is a rare neurological disorder characterised by complete paralysis of voluntary muscles in all parts of the body except for those that control eye movement. It may result from traumatic brain injury, diseases of the circulatory system, diseases that destroy the myelin sheath surrounding nerve cells, or medication overdose. Individuals with LIS are conscious and can think and reason, but are unable to speak or move. There is no cure as of today, nor any standard course of treatment.

‘Life is very difficult,’ says Luigi Ferraro. ‘Often Daniela says she wants to die, that it would be better if she was in a real coma, that to be conscious and stuck in your body is a terrible thing… but we have two children and they keep her alive. Daniela communicates with us by moving her eyes up or down. To this day she has not shown any improvement at all. My only hope resides in stem cell therapy. I am trying to give my wife and my two children the best life possible given the circumstances, and I have set-up an association (The Friends of Daniela) to provide help and support to families affected by LIS.’

A European federation for the syndrome is about to be created. ‘It is after meeting with Luigi’s association that the idea of a federation came up,’ says Veronique Blandin, from the French LIS Association (ALIS). ‘Knowledge of the disease and quality of care for people affected by LIS are better in France than they are in Italy. Our objective is to give people living with the disease a reason to live. We want to raise awareness of the disease and increase the quality of care for all patients in Europe.’

‘When someone as close as your wife goes into a coma, you feel as if you were in a tunnel, walking in the dark, not knowing what to do…’ continues Luigi. ‘Life is difficult, but I keep telling families to never stop loving the person suffering from LIS, to never leave them in a desensitised care structure. They are alive and fully conscious, just like us. All they need is love.’

This article was previously published in the January 2009 issue of our newsletter.