The mother of a child with NBIA tells their story 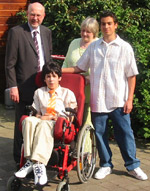 ‘My husband and I had to wait a dreadfully long six years before we were finally able to obtain the correct diagnosis for our son, Dietmar, who is now 16,’ says Angelika. ‘He had movement disorder, balance and fine motor skills problems. When he reached five, the doctors told us he had Attention deficit hyperactivity syndrome (ADHD), but the diagnosis just didn’t fit. Some doctors even told us it was a psychological problem. We didn’t know what to think. At the age of ten, Dietmar was causing himself so many injuries by falling down that we asked the doctor for a brain scan.’ Finally, in October 2001, after an MRI (Magnetic resonance imaging) exam, Dietmar was diagnosed with Neurodegeneration with brain iron accumulation (NBIA), previously known as Hallervorden-Spatz syndrome. NBIA is a very rare, inherited, neurological movement disorder characterised by the progressive degeneration of the nervous system. Its estimated prevalence is 1 to 3/1,000,000.

‘We had never heard of NBIA before, let alone of rare diseases. A friend of mine did some research on the internet and printed some data he found through the American NBIA Disorders Association. We couldn’t find anything similar in Europe, so we contacted researchers in Oregon and families in the US, who responded quickly and were very supportive. In May 2002, I participated in the Second Family Conference of the NBIA Disorders Association in Indianapolis. At the conference, I saw so many children who couldn’t walk, talk or eat by themselves. It was heart-breaking. At least we were lucky that Dietmar was still able to walk around the house.’ Back home in Velbert (near Düsseldorf), Angelika got in touch with the Kindernetzwerk (The Children’s Network, Germany) and thanks to their database, she was able to contact two German families living with NBIA. With the help of some relatives and friends, she set up the Hoffnungsbaum (Tree of Hope) association in November 2002, a patient group dedicated to NBIA. Now, four years later, Hoffnungsbaum counts 40 members representing 14 NBIA families. ‘We believe there are at least 30 NBIA patients in Germany, probably more, but no one knows exactly. It’s such a rare disease that it is difficult to get in touch with other people affected. That’s one of the reasons why we need a patient registry,’ says Angelika.

The objectives of Hoffnungsbaum are to foster research in NBIA; provide emotional support to families living with the syndrome; raise awareness and knowledge of the disease wherever it is needed; and set up a centre of expertise for the syndrome. In November 2006, Hoffnungsbaum organised the third German NBIA Family Conference, with 11 families attending. ‘Parents were able to share their experience and children had lots of fun. Blood samples were also collected for the American NBIA Disorders Association biobank,’ recalls Angelika. This biobank was launched in 2003 thanks to a donation of $50,000 and is now a member of the Genetic Alliance BioBank. ‘It’s a pity there is no European NBIA patient group network of some sort at the European level, because sometimes we are contacted by patients outside Germany, and there is not much we can do. I also think that each country should have its own NBIA patient organisation,’ says Angelika. The next opportunity for NBIA families from all over the world to meet and share experience will take place during the Fourth International Family Conference, organised by the American NBIA Disorders Association, from the 4th to the 6th May 2007 in Cincinnati, Ohio.

Dietmar had Deep Brain Stimulation (DBS) in May 2006, and it has improved his dystonia, a common feature of the disease that causes painful and prolonged muscle spasms. Before the DBS, Dietmar had to lie flat at all times. Even sitting in his wheelchair was very painful and exhausting, due to muscle cramps. ‘We know that the progress is temporary, but we make the most of it,’ says Angelika. ‘Dietmar has less pain, he can sit up again, he can eat by himself, and we can have our meals together at the same table. We hadn’t done that for four years.’ Hoffnungsbaum e.V. recently decided to support a retrospective study on the effects of DBS in NBIA-patients. The patient organization will award a grant of $ 15.000 to Dr. Lars Timmermann as Primary Investigator, now Clinic for Stereotactic and Functional Neurosurgery at the University Hospital of Cologne.