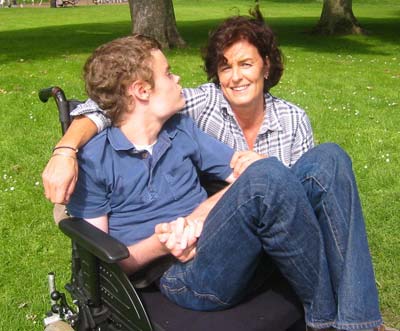 Philippa has superior semicircular canal dehiscence syndrome (SCDS), a rare balance disorder. SCDS is a developmental anomaly that occurs during the first three years of life and is thought to be caused by a lack of bone growth in the uppermost balance canal of the inner ear, which can cause a tiny hole to develop.

Dr. Lloyd Minor, an ENT specialist at the John Hopkins University School of Medicine, Baltimore, discovered the condition in 1995. He connected strange symptoms in a few of his patients to a study of pigeons in which specific eye movements had been linked to damage to certain canals of the inner ear.

“Some of my first patients were referred to me by psychiatrists. I would later discover they were experiencing symptoms coming from inside their heads – but not in the ways others might have supposed,“ explained Dr. Minor in a speech in 2011. Sound or pressure can trigger abnormal activation of the balance canals in the ear, which in turn leads to a wide range of distressing and disabling symptoms.

“The holes in the bone (one on each side in about 50% of sufferers like me) are tiny, but their effects are far-reaching,” says Philippa. “SCDS is not as rare as initially thought (the anatomic defect is present in 1-2% of the population) but for an invisible disorder of this kind, public awareness remains a huge challenge. It has been estimated that 10% of chronic dizzy patients could have SCDS, but many of these cases are possibly being overlooked.”

The Path to Diagnosis

“By my twenties I was sure something wasn’t right. I often felt nauseous, unbalanced, or both, and little by little my confidence was eroded,” recalls Philippa. “As a researcher for a book publisher, I regularly worked in the British Library, which I loved. But I began to dread the walk from my desk to the central collection area. The sounds of trolleys moving books around or shelves being restacked seemed to cause a feeling of unsteadiness and anxiety. I put this down to some sort of panic attack. The same sensations gradually extended to other environments and fluctuated wildly, which added further confusion. This continued into my forties. Then in 2003, a sharp change of pressure during the descent at the end of a flight triggered the full range of symptoms. The inside of my head felt like a balloon I badly needed to burst.”

For those who become symptomatic there is considerable variability in how they present to their doctors, and as a result many cases may be going undetected. It took Philippa four years to get a diagnosis, and her symptoms were subtly changing over that period. “The headaches were becoming severe, the nausea persistent, my vision was often blurred, and it was extremely uncomfortable to raise my voice, sing or eat crunchy foods. I had great trouble hearing people in noisy surroundings, and yet I was also hypersensitive to certain sounds such as a banging door, or a spoon clattering as it fell on the floor. I had no idea that my years of unsteadiness were directly linked to these new problems, and that the long-standing creaking noises in my neck or the clicking sounds from my eyes might be significant.”

By the time Philippa visited a consultant to be evaluated for another unusual condition – patulous Eustachian tube, where the tube connecting the inner ear to the nasopharynx doesn’t stay closed – she was having frequent freeze-on-the-spot attacks of vertigo, and no longer felt safe driving. The wide-ranging symptoms had caused her life, already a complicated one with the care of a severely disabled child, to become a daily and isolating struggle. A CT scan confirmed SCDS.

“Referral for surgery should have set me on the path to improvement. But an experimental procedure proved disastrous. I came out in a worse state, with terrible vertigo and pain,” says Philippa. After 18 exhausting months she went to see Dr. Gerard Gianoli in Louisiana. He established that the SCDS was in fact bilateral, and performed revision surgery on the left side. He also explained all the anxious years: “Panic attacks are the result of too much of a particular chemical (eg. Catecholamine) surging through your bloodstream. Abnormal vestibular stimulation is a common trigger for their release.”

“Surgery was an easy choice for me as the condition had taken control of my life”, says Philippa. “But there were serious risks to consider, including hearing loss and nerve damage. These operations aren’t an overnight fix; the brain has a lot of adjusting to do. My right side was successfully repaired in 2012 but I still have whooshing noises from pulsatile tinnitus. The first side unfortunately remains problematic due to a rare nerve syndrome linked to the SCDS. I continue to manage ever-present symptoms from that.”