At the 2007 Special Olympics World Games held in Shanghai, Laura Galluppi, 21 years old, won a gold medal and 2 bronze medals in the Equestrian event. This pretty young woman, smiling brightly while proudly wearing her medals, has Phenylketonuria (PKU), an inborn error of protein metabolism that results from an impaired ability to metabolise the essential amino acid phenylalanine. There are various degrees of PKU and if untreated, this rare disease can lead to brain retardation and nervous system function problems (affecting muscle coordination). A strict diet usually allows diagnosed patients to lead a near-normal life.

Laura was diagnosed when she was 12 and her mother, Renza, recalls the long ordeal from Laura’s birth until that day. “When finally the Phenylketonuria diagnosis was confirmed, it was as if I gave birth a second time to Laura. I’d been going everywhere: from Venice to Milan, consulting every possible doctor – from the psychologist to neurologist. When Laura was a little girl, she was very sensitive to noise, and whatever motion or movement she learnt would be forgotten just as quickly. The turning point in Laura’s diagnosis was when we learned that she was allergic to red meat. Her focus improved a lot once she stopped eating red meat.” Following Laura’s diagnosis, the younger son of Renza, Tommaso, underwent tests too and he was also diagnosed with Phenylketonuria (Renza’s eldest son Giacomo is not affected).

Laura has a special diet with very low protein intake (35-40 grams max. per day) but that doesn’t prevent her from cooking, especially home-made bread! “I can make all sorts of bread and I just love to eat – seafood is my favourite!” says Laura. At only 21, Laura manages to make things look easy but each and every day, she has a prescription of 12 different pills! 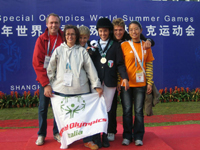 Laura has been horse riding since the age of 12. Last year was very hectic for her. “I was training for the Special Olympics and had to wake up very early and travel on my own in order not to miss any sessions. It was tiring but I was determined to win!” Her three medals weren’t Laura’s only trophies. Far from her loving and protective family, in a very competitive and strict atmosphere, Laura learned a lot. “I am more independent now. Before the Olympics, I was hesitant and now I have much more confidence. The training has sharpened my focus and my concentration abilities. For the equestrian competition, I had to remember a series of movements and orders for the horse. For me, it was something that was hard to do,” says Laura.

At 8, Laura couldn’t read or write. Now, she emails her friends and family constantly. She works part-time at her father’s perfume shop in Venice. “ I love to advise women on the different perfumes but what I would really like to do as a career is to be a teacher,” says Laura. With all that she has accomplished at such a young age, despite so many hurdles, we can bet that Laura Galluppi meets this challenge in the near future!

This article was previously published in the December 2008 issue of our newsletter.