Retinoblastoma – With ocular prosthesis, but without velvet gloves

Home » Retinoblastoma – With ocular prosthesis, but without velvet gloves

How children live with eye cancer 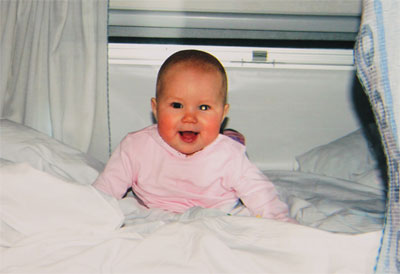 Retinoblastoma. Only one word. One word that few people know or have ever heard. Yet it causes apprehension. Sounds ominous. And people who learn about it for the first time in their lives from a doctor will probably never forget that moment. The parents of the today 5 years old Julia Fischer in Rhineland, Germany, might feel the same. Retinoblastoma is a cancer. It is the most common eye cancer in children. It is a malignant tumour in the retina. As the retinoblastoma may only grow in immature retinal cells, the tumour only occurs in children up to the age of five. This is the description you would find in medical literature. Julia – she was born with child eye cancer.

“I always wanted her.”

It was such an uncomplicated pregnancy. Little Julia’s birth was easy as well. “Everything was easy,” recalls Charlotte Fischer*, Julia’s mother. She laughs as if it only happened yesterday. She and her husband Sebastian do already have two healthy girls, then nine and eight years old. The anticipation to welcome Julia was great. Everybody was excited. That could be all there is to say, but Charlotte Fischer says it how probably only a mother could: “There is still someone who wants to join us. I knew that this child was there. I always wanted it.” In August 2006 Julia was born in a hospital in Rhineland, Germany. The ‘three girls’ house’ was perfect.

To understand Julia’s story better it is probably very important to know what kind of child she is: She is a bright child, a cheerful child, a strong child. A child that gives so much love and radiates vitality. This is how Charlotte Fischer describes her daughter. Yet back then Charlotte and her husband had no idea how important these qualities truly would become for the life of their child. Not even when during the summer holidays in 2007 a friend of the family noticed that “the child squints” and advised the parents “to take her to an ophthalmologist”.

For small children to squint every now and then is nothing unusual. But naturally, Julia’s parents took her to an ophthalmologist in Düsseldorf straight after their return from the holiday. It was 13 August 2007. A date that is burnt into the parents’ memory. Julia was one year old. After the examination at the surgery only one sentence was spoken: “There is something.” The family was referred to the university hospital in Essen because “there are the specialists”, says the ophthalmologist, “There you will see.” The parents made sure to get seen in Essen on the very same day. Charlotte Fischer recalls the very first journey to Essen, without any specific diagnosis from the referring doctor, only with this overwhelming feeling of dread. And this fear, “There is this lift. And there is this chiming announcement ‘vision therapy and tumour department’.” No mother would think about this kind of place or would want to enter it carrying her own child in her arms.

In one stroke, life as we knew it changed

Julia is examined. Thoroughly. Three doctors perform tests. The white pupil that can be seen in Julia’s baby pictures – here this phenomenon is explained: The child’s pupil does not adjust, it does not respond to light. Then finally, one of the doctors makes the diagnosis: “Retinoblastoma. Malignant tumour in the retina. In both eyes.” Sentences delivered like blows. Charlotte Fischer said “I screamed, I cried, but my husband remained rational. Utterly calm. “Two poles that complement each other. She said, “Our life would change. That much was clear.”

Can a child, five years of age, already be strong – to deal with the adversities that human life has in store? Little Julia Fischer appears to be so. When on 20 August 2007 – exactly one week after the cancer diagnosis – she awoke from anaesthesia after a two-hour surgery at the university hospital in Essen, her right eye had been removed. Only a dark hole remained. The child did not scream, it did not wail. It endured. The week between diagnosis and surgery the Fischer household was in a state of emergency. It was an unbelievable strain on everybody – for Julia’s big sisters as well. In his study Sebastian Fischer searched through relevant literature, talked to experts all over the world on the phone. “I wanted know and understand everything, and get through to the details,” he said. He owes it to his child. And this feeling drove him, kept him upright, for six long weeks. He searched 24 hours a day, until he could not continue, until he had reached exhaustion: “And then I also started to cry. In the middle of the night, I was unable to stop the tears,” he states calmly. He cried. For hours he cried: “Because it was not just a disease that I tried to understand in all its facets. This was my child that was concerned, whose life I was fighting for.” Silence. Then the conversation stopped.

Sebastian Fischer, studied biologist and jurist, becomes an expert with whom his child’s doctors can almost talk at eye-level. His wife remembers that a doctor once told her: “Ask your husband.” Suggestions regarding the treatment are not made by the attending doctors. The parents have to make the decisions themselves: What is to happen with their child? Which treatment should Julia get? Chemotherapy? Or radiation? What risks are there? Who helps us decide? And what will happen with the tumour in the second eye? Do we ask for it to be removed as well and take away our child’s eyesight? Inconceivable, what kind of decisions parents sometimes have to make.

“Your child guides you.”

But for their child they both found their way, with the help of many friends who were there to discuss things with them until late into the night during that first week. In between crises, terrible crises, especially for Charlotte Fischer, who did not know how her daughter was to bear this fate. A friend, who also has a sick child, gives her a touching answer: “Your child guides you.” What sounds so transcendental proved to be true in the coming weeks and months. Julia bears her fate, the first ocular prosthesis and the radiation therapy.

Yet she still has a long way to go. There is radiation therapy for the second eye to come. For weeks, mother and child live in the hospital. 50 km away in their nice family home the father tries to manage with his two older daughters. However, his thoughts are always in Essen. Charlotte Fischer refers to the meeting place for the young little cancer patients as a parallel world. Somewhere in the catacombs of the university hospital the children – with bold heads, some frightened and exhausted, some calm, others whining – sit and wait with their parents to be called. Charlotte Fischer recalls this time that now is four years ago: “I often felt helpless. The fear stills returns in waves.” She feels her life has become richer, but also less carefree. Mother and daughter return regularly to this parallel world, to the university hospital in Essen, to the lift, to the tumour department. Every three months, for a check-up. What means psychological stress for Charlotte Fischer is “almost a feast” for Julia. Because her very own basket full of games always accompanies her. Julia loves these games. The mother knows they not only help with the here and now, but they will also help her child to remember this time in many years when she is a young, grown-up woman, to recall a good picture from a dark time. People need pictures, beautiful pictures. Charlotte Fischer is convinced that “they may help us to bow to our own fate.” That sounds beautiful. Hopeful. Optimistic.

Sabine Kuenzel
Translated in to English by Peggy Strachan