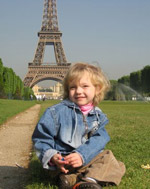 Yuliya, a five year old gorgeous blue-eyed girl, had a normal childhood until her first birthday. “By the time she was one, we noticed her having difficulties standing up and she was walking strangely,” remembers Vitaliy Matyushenko, her father. But there was nothing that could prepare him and his family for the terrible diagnosis that they would receive a few months later: Yuliya had Spinal Muscular Atrophy (SMA) type II, a rare disease with a prevalence of 1 in 6000. “Those few months were a hard time for our family. We went to every hospital and medical centre we knew, received many wrong conclusions and even now, I feel bad when I think of all the pain Yuliya had to go through with the various tests,” says Vitaliy.

SMA is an autosomal recessive genetic disease that destroys the nerves controlling voluntary muscle movement which affects crawling, walking, head and neck control and even swallowing. An individual with SMA has a missing or mutated gene (SMN1 or survival motor neuron) that produces a protein in the body called Survival Motor Neuron (SMN) protein. SMA is diagnosed primarily through a blood test, which looks for the presence or absence of the SMN1 gene. Both parents have to be carriers of the abnormal gene to have a SMA affected child, and if they are both carriers, the likelihood of having a child inherit the rare disease is 1 in 4 (25% approximately).

The Matyushenko family lives in Kharkiv, Ukraine and Vitaliy believes that there is still a lot to do to to raise people’s awareness of rare diseases and admits that before his daughter’s diagnosis of SMA, he or his wife, Svitlana, did not know anything about any rare disease. “After the diagnosis, the first impulse was to stop everything because our life was torn to pieces and we didn’t have any hope left. But then after a few days, we started again, hoping again, knowing deep in our souls that this was not the end, and we decided to know more about the disease.”

Vitaliy is the President of Kharkiv’s charitable foundation, Children with Spinal Muscular Atrophy (CSMA), which raises awareness among Ukrainian citizens. Its main goal is to “win time for Yuliya and all children with SMA in Ukraine”. CSMA is a partner of the Families of SMA (FSMA) network and a full member of Eurordis.

It is very important to stimulate a child with SMA to improve mobility. Besides the particular medical procedures like massages and water therapy, which is very helpful as the buoyancy of the water allows movement of the arms and legs that may otherwise not be there, fun is also part of the programme–Yuliya swims with dolphins. SMA does not affect sensation and intellectual activity in patients. It is generally observed that patients with SMA are unusually bright and sociable. Vitaliy praises his wife Svitlana who quit her job to take care of Yuliya and of their 2 year old boy, Danylo. “She is a wonderful woman, taking care of two children, doing the housework, making our home cosy with all the amenities that Yuliya requires, and with no professional help at all!”

Now five, Yuliya can crawl around using the muscles in her arms and uses her wheelchair when necessary. (Vitaliy has uploaded a series of videos about SMA in Ukraine and clips on living with SMA on YouTube.)
In 2008, Vitaliy looks forward to the results of clinical trials in SMA, under the aegis of Treat-NMD. This is based, partly, on promising new research that has identified drug candidates that can increase the levels of human SMN protein and is coordinated by the Italian Fondazione Telethon. “Though babies still die with SMA Type I each year, I have hope that there is something hopeful that will come out in the future,” concludes Vitaliy.

This article was previously published in the March 2008 issue of our newsletter.