In 1983 Liz Blows was diagnosed with diabetes. She adjusted to a regime of dietary control and regular injections and got on with her life.

In 1989 Liz and her husband, David, embarked on the lengthy process of adopting two children. It was during this period that Liz began to experience a strange tightness in her upper abdomen. “I put it down to the stress of the weekly interrogations during the adoption process.” recalls Liz. As time passed Liz began to experience more and more symptoms: lower back pain, anxiety about trivial things. A series of tests revealed nothing. During the next few years more symptoms began to manifest.

” My movements were becoming more and more limited; sounds, touch – anything unexpected made me jump like someone had plugged me into a high voltage socket. I developed an irrational fear of crossing the road. Bending became difficult and my back, neck and legs kept stiffening up,” says Liz. I was someone who was always busy, meeting people, dancing the night away and now I was always making excuses not to do things.
Liz’s GP was mystified and came to the conclusion that it must be all in her head. She saw various consultants, tried alternative therapies but nothing helped. Finally she was referred to a neurologist who told Liz she was presenting a condition called Stiff Man Syndrome. He added, however, that this was unlikely because it was so rare that, in all his years as a neurologist, he had never seen a single case. The incidence of this syndrome occurring is 1 in 1 million. 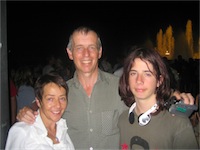 “As David and I left the consulting room I knew, beyond doubt, that what he suspected would be my diagnosis. I had never felt so frightened in my entire life.”
Numerous tests followed and seven years after the initial symptoms presented Liz was found to indeed have Stiff Man Syndrome.
Stiff Man Syndrome, or Stiff Person Syndrome as it is also known, is a rare neurological disorder believed to be of auto-immune origin. Most sufferers appear to have at least one other auto-immune condition, the most common being type 1 diabetes (approx 48%). First symptoms are insidious and, as in Liz’s case, are often misdiagnosed as a psychological problem or as depression. Primary symptoms are painful muscle spasms, stiffness of the trunk and limbs, an exaggerated startle response, anxiety and task-specific phobia. Onset occurs mainly in the 30s or 40s and symptoms can develop over months or years. Progressive muscle stiffness makes walking difficult and can render the sufferer immobile. A fear of open spaces, often manifesting in a fear of crossing roads, may induce freezing of the muscles, spasms and falls.

Liz and David’s response to her diagnosis was to learn all they could about the syndrome but very little information was available. One thing their research did uncover, however, was the name of a man in the USA who was also living with SMS. Liz made contact with him and through him with another sufferer, in the UK.

“It’s almost impossible to describe the relief I felt to speak to someone else who understood what I was going through,” Liz explains. Liz realized that what was needed was some sort of contact network so, being a resourceful and determined woman, she took matters into her own hands and started a support group and charity, SMS support group.
“I am not a fan of support groups but it just seemed to be the right thing to do. I find it incredible that every member when they’ve joined the group has not known anyone else with the condition and the relief they experience to find they’re not an alien” says Liz. The group started as a way of people living with SMS to connect with each other and share experiences. It has succeeded remarkably in this aim, having around 100 members in the UK as well as links to groups in Germany, Spain and further afield.”
Now the most important thing” says Liz “is to raise awareness of this condition”.
She

The National Organization for Rare Disorders (NORD) in the US has announced funding opportunities for 2010 through its clinical research program. Grants are available through this international program for the study of five rare diseases, amongst which Stiff Person Syndrome. The deadline for submitting abstracts and letters of intent to NORD is May 17, 2010

This article first appeared in the May 2010 issue of the EURORDIS newsletter.