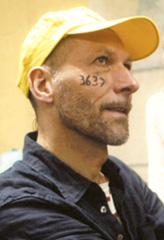 ‘My father stopped walking quite early and had to use a wheelchair. Despite this, we never thought about the possibility of a hereditary disease in the family, ‘says Philippe Grammont, founder and Vice-President of the French Association for Strümpell-Lorrain (A.SL). ‘The first symptoms of the disease appeared when I turned 35; problems while running and fatigue in the legs. Three years later, a test revealed that my cerebellum was atrophied. However, I didn’t get a proper diagnosis until many years later: Strümpell-Lorrain disease, also called familial spastic paraplegia. My father was affected and passed it on to me and one of my brothers. My two other brothers and my sister did not inherit the defective gene. The evolution of Strümpell-Lorrain disease varies according to the individual. This is why my brother, close to me in age, can still walk with a cane, whereas I have had to use a wheelchair for several years. The disease has affected my whole family. Tests have shown that the gene responsible for spastic paraplegia is dominant in my case, which means that my two daughters have 50% risk of being affected too. They were distressed about this for many years, and we avoided talking about it. We eventually did, and they are now looking forward to their future, even if the risk is still there.’

At the time the first symptoms of the disease appeared for Philippe, hereditary spastic paraplegia was not well known, which created a feeling of isolation among patients. Philippe therefore decided to create the French Strümpell-Lorrain Association in 1992 to bring French patients together. Today, the association is 700 members strong, across the entire French territory. Philippe has made contact with many patients suffering from spastic paraplegia throughout Europe, to convince them to create a patient organisation in their country. To date, 14 organisations have been created, some of them in conjunction with ataxia organisations, because the pathologies are similar (problems affecting the cerebellum and/or the spinal cord). Philippe even went to Germany, Switzerland, England and Spain to develop the European network. ‘Even if I don’t speak other languages well, I feel European before feeling French,’ says Philippe. ‘What is really missing today is a European federation to bring together all the organisations under one banner. Sometimes, the patients with whom I am in contact prefer to create a local branch of A.SL, rather than set up their own organisation. This decreases the impact we could have.’

Philippe’s activities are not contained to A.SL. He plays an active role in SPATAX1, a European research network on ataxias and spastic paraplegia, created in 2001 and supported by INSERM2 and AFM3, and incorporating 27 teams from 13 European countries. The network meets once per year to share the latest results in research. In parallel with SPATAX, Philippe became involved in the French federation for rare diseases Alliance Maladies Rares, of which A.SL is a member, and he took the position of Regional contact person for Franche-Comté (a French region). Convinced of the importance of the development of European networks, Philippe ensured A.SL became a member of EURORDIS. Philippe subsequently attended the Eurordis Membership Meeting 2003 in Namur and 2006 in Berlin. ‘Berlin was for me a unique opportunity to meet with other people affected by rare diseases. Focusing on my own disease doesn’t suit me; I need to help all those affected by rare diseases.’ And Philippe took part in the Eurordis photo contest 2006!

In no specific order, some of the activities led by Philippe: organisation of a rare disease walk in Besançon every year; organisation of an annual forum on rare diseases in Franche-Comté, which is always a great success among health professionals; creation of a film on spastic paraplegia to raise awareness of the disease and support patients in their daily life; and participation in the French-speaking Summer University for public health. Philippe never gives up, even he complains about the lack of volunteers in the area. ‘My projects help me to move forward,’ he says. ‘Being busy with others enables me to overcome my own problems.’