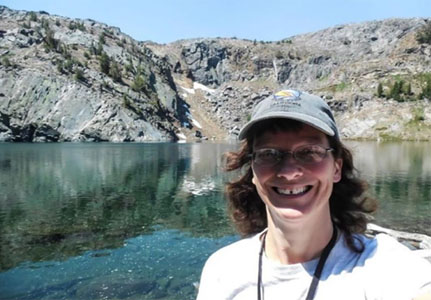 Cindy from the US tells us her story of living with Behçet’s disease, a chronic condition resulting from disturbances in the body’s immune system.

Connect with others living with Behçet’s disease in the online RareConnect community.

In 2008 I started getting episodes. I have always been very active. But I started feeling extremely exhausted. I had trouble walking across a parking lot. I felt like I had a wet, thick wool blanket over me and I was trying to run in a swimming pool. I started getting strange neurological symptoms. A few weeks later, I was walking when I suddenly couldn’t feel anything from my ankles down.

I went through the whole referral process in the rural area where I live. I saw a rheumatologist, two neurologists and an endocrinologist. I had brain scans, nerve conduction tests and blood tests. Three years later, they told me that I needed to go to a tertiary hospital.

First I saw an endocrinologist, who had no idea what was wrong with me and wanted me to see a neurologist and a rheumatologist. The neurologist was confident that I didn’t have multiple sclerosis, but didn’t know what was wrong.

I was getting sicker and was in a very dark place. Then I saw the rheumatologist and everything changed. The rheumatologist came skidding into the room, literally, with his hair stuck up. We talked briefly and he said he’d be back in 10 minutes. 15 minutes later he came back – he had rescheduled the rest of his appointments and spent over 2 hours with us! Amazing!

He believed that I had Behcet’s Disease. I was a textbook case. He said he wanted to do DNA typing but that he didn’t expect it to come back positive, since about half of Behçet’s patients don’t. But then the HLA-B51 did come back positive.

Finally, I had a diagnosis and I was relieved. Even getting a bad diagnosis was better than not knowing what was wrong with me. I researched Behcet’s disease extensively. But my spouse was struggling. She was relieved to see me uplifted as a result of the diagnosis, but devastated that I had this rare autoimmune disease.

My elation was also short-lived. Between trying various treatments and dealing with the side effects, I was angry about having this life-long disease that could tear me down slowly over the years. I was angry at the world.

How did I work through it? I don’t know. I tried to look at the positive but that really didn’t work. I continued to work full-time, even though there were many times that I thought I physically couldn’t. I continued to work out, saw a therapist for a few weeks, continued to paint, travel and even started to backpack again. I was determined to lead as normal a life as possible! But nothing seemed to work.

However, one day, a little over 2 years after my diagnosis, I just suddenly realised that I wasn’t as angry has I had been. I was finally able to look beyond the negativity and see that it wasn’t personal. It didn’t seem to be gradual – just one day, I wasn’t as angry.

We tried various medications and combinations of medications. Finally, we came upon a combination that worked better than the others. There were some side effects but overall I tolerated it pretty well. That is until I started getting toxicity from it.

At that time a new medication had just come out, but it was very expensive. Using this drug for any other disease, at the time, was considered using it off-label, and insurances don’t usually pay for off-label medications. Well, my doctor wrote a letter to my insurance, but the insurance company proceeded to deny payment of the medication. We appealed it.

Again, we were lucky, as the pharmaceutical company who makes the medicine had just published a research paper in the New England Journal of Medicine showing that it was effective for Behçet’s Disease. After about 9 months (and 2 appeals), my insurance approved the medication and I’ve been taking it ever since.

I’ve never been in remission or even close to it. I continue to suffer from rashes, sores, systemic issues, autonomic nervous system dysfunction symptoms, vasculitis symptoms and memory problems. I’ve had episcleritis and iritis in my eyes. I’ve developed a form of mild OCD (minus the “C”) which is a component of the disease.

But my current treatment plan has minimised the severity and frequency of these symptoms. Basically, I am able to do any activity I want as long as I adjust certain things for my life. I enjoy backpacking, camping and painting. I workout for 5 days a week and continue to work full-time.

What helps me to cope with Behçet’s disease?

I’m no guru, medical doctor or psychologist. I’m just an average person with an autoimmune disease. I’ve found ways that have helped me, and I sincerely hope you do too!