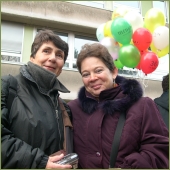 Marianna Lambrou stepped up to the podium at the European Conference on Rare Diseases with a smile to give her presentation as part of the second topic to be addressed by the conference:

Her Tuberous Sclerosis story begins forty years ago when the disease was almost unknown in Greece. And though the authorities have begun tackling the problems associated with rare diseases, the saga continues.

“My daughter Katerina was born in 1968 and the doctors diagnosed congenital cardiopathy” explains Marianna Lambrou, a member of the Eurordis board. After successful open-heart surgery carried out in Houston, USA and a happy, healthy childhood ahead of her, Katerina had an epileptic seizure. The paediatrician at Athens Hospital announced the shocking news: Tuberous Sclerosis. “You’re unlucky and lucky at the same time” he added. He explained that epilepsy was the only symptom and it was slight compared with many others living with the same disease. Mental retardation, autism, severe skin problems and other problems affecting the organs were not present.

After a difficult period finding the correct dosage of epileptic medication, Katerina had a fairly “normal” childhood. When she was ten years old the family sought a second opinion on a trip to England. A scan confirmed the diagnosis and revealed brain tumours. Headache followed headache, hydrocephalus was diagnosed and a shunt system was placed to drain the liquid. This meant regular check-ups with the neurosurgeon in England. “Katerina was twelve. This was a new problem to add to her life – and mine.”

Other, no less serious, symptoms emerged. Recurrent abdominal pain received an erroneous diagnosis and treatment for appendicitis. Persistent symptoms gave rise to repeated urinary infections. Operations were carried out to no effect. There is still no clear diagnosis for this pain. Doctors examined Katerina’s kidneys in an effort to find an explanation and found tumours which did not obstruct their functioning. That is, until a haemorrhage ruptured one of her kidneys. Nonetheless Katerina loves life and continues to explore her talent for ceramics and painting.

She is nearly forty now and has many interests and projects. She remains optimistic despite the need for regular embolizations to safeguard her second kidney. She has undergone fifteen operations, half of which could have been avoided had doctors kept abreast of research and treatment advances. Marianna Lambrou’s determination is undiminished. Hope and courage sustain her and she is determined to share them. “During the many and varied situations we have faced up to now, solutions always came from immediate and correct coping with them. You can find the strength to face up to unimaginable difficulties. Despite struggles even with doctors themselves, I persist and fight for what I believe.”

Her cause is the training and informing of medical practitioners and the systematic updating of their knowledge. This is one of the aims of the organisation that she founded with doctors and patient families in 1992 in order to pass on her knowledge and experience to other patients. Screening for this complex genetic pathology is now widespread and tests exist to monitor the patient. The Tuberous Sclerosis Association of Greece joined Eurordis in 2000. And a national alliance was founded in 2003, with Eurordis’ support, to fight the rare disease cause in Greece. Another string to the European bow in the drive for “solutions for every country in Europe. As rare diseases and their cures have no frontiers.”

This article appeared in the September 05 issue of our newsletter