UN Resolution is adopted: what does it mean for Europe?

Home » UN Resolution is adopted: what does it mean for Europe?

“If there is only one patient suffering from a disease that still means we all are suffering from it. Let’s invest in understanding ourselves better and beat rare diseases.” – Max, Netherlands 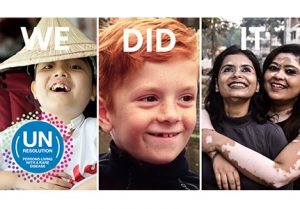 Notably, the European Union Member States, all of which voted in favour of the Resolution and with 11 acting as co-sponsors, have acknowledged the existing barriers and challenges the 30 million people living with a rare disease in Europe face in their daily life and expressed their political determination and firm commitment to continue to:

Prior to the UN Resolution on the challenges of people with rare diseases, in the debate at the European Parliament on 24 November, Stella Kyriakides, EU Commissioner for Health and Food Safety, emphasised “the need for us to all work together” and committed to continue to “make concrete and tangible improvements and changes to the lives of rare disease patients and their families.”

By adopting the UN Resolution, the EU Member States have once again reaffirmed the need for immediate collective European policy action to ensure that the future of the rare disease patient community is not left to luck or chance by 2030. Europe’s Action Plan for Rare Diseases, an innovative, future-proof and holistic policy framework for rare diseases proposed by EURORDIS-Rare Diseases Europe, is a true reflection of this commitment made by the Member States at the United Nations General Assembly on 16 December.

“No one should be left without help. Isolation from people, lack of medical care and architectural barriers are already enough evidence to feel excluded from life.” – Ewa, Poland

The Action Plan represents the first and most comprehensive step towards reforming health care systems across the EU with all the required steps, deliverables and measurable goals to bring Member States’ commitment to rare diseases under a common umbrella and mark a step forward in the post-COVID world.

In practice, it would guide the implementation of person-centred and gender-sensitive national plans and strategies for rare diseases – a measure also called for in the UN Resolution – with the same measurable objectives. It would also bring together a refreshed concerted strategy across research, digital, healthcare, social welfare, complementing existing legislation and encourage continued investment in the field of rare diseases at both the European and national levels to ensure we do not lose momentum – in other words, contribute to a stronger, person-centred and needs-led European Health Union.

“Every patient has the right to a better quality of life, and the lives of those with rare diseases are also important. It would be good if decision-makers also pay attention to their health. Every life is valuable.”–Tunde, Hungary

We call upon the European Commission to support Member States’ efforts to improve the lives of all Europeans living with a rare disease and help fulfil their commitments related to the adopted Resolution the 2030 UN Agenda by putting forward a European Action Plan for Rare Diseases and putting it higher on the EU’s political agenda.